How’s THAT for a title?! Bet it caught your eye! 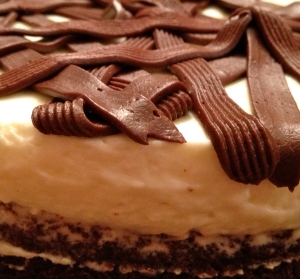 This is what we had for dessert on Friday night when Sarah, Laura and Reg came over. It was heavenly.

The original recipe had bananas on top, but I don’t like bananas. Plus, I wanted to keep practicing my piping with my new piping set! So I ixnayed the bananas and brought in the icing. I also wanted to make sure that the brownie was nice and chewy. So I ixnayed the one in the recipe and used a chewy recipe instead. And so the creation was born! 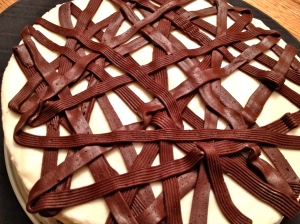 This recipe really isn’t hard, it’s just a bit time consuming. And if you’re
like me and you make the icing too thick, you can expect major arm exhaustion (and to need the help of a stellar room mate) just to get it out of the piping bag. I can guarantee you that it will impress ANYONE (even if all you want to do is eat it all to yourself with no one but your tummy to impress). 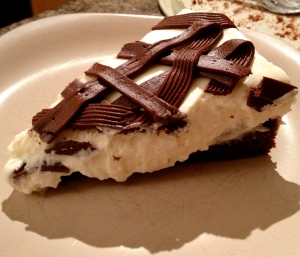 Normally I would crop out the shadow, but I love how substantial it looks here

Preheat the oven to 350F. Spray a 9 inch spring form pan with non-stick spray. Make sure that the sides of the tray are at least 2 3/4 inch high. Stir butter and both chocolates in a heavy small pot over low heat, stirring often to keep the chocolate from seizing. Keep the heat low! Remove when it’s melted and smooth and cool completely.

Using an electric mixer, beat eggs, sugar and vanilla in a large bowl until thick and smooth (3-5 minutes). Beat in the vanilla and stir in chocolate. Mix in the flour until just combined. Transfer the batter to the prepared pan and bake for 25-30 minutes. Cool completely.

Heat some water over medium heat until it is just barely simmering. Place 3/4 cup of the whip cream in a small metal bowl that will rest nicely over the pot (or use a double boiler if you have one). Break up the chocolate and put it into the whip cream. Resist the urge to turn the heat up as white chocolate seizes really easily. Be patient and stir occasionally until chocolate is melted and well combined. Let cool completely.

Beat the remaining 3/4 cup of cream in another bowl until peaks form. In another clean bowl (using clean, dry beaters) beat egg whites until stiff but not dry. Gently fold whites, then whipped cream into the cooled chocolate mixture and pour over top of fully cooled brownie, cover and refrigerate for eight hours or overnight.

Icing (depending on how you want to ice your torte, you can make more) 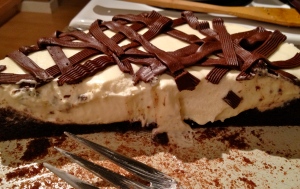 Place butter in an electric mixer and beat with paddle attachment until smooth. Mix icing sugar, cocoa and salt in a small bowl and add a bit at a time, beating in between. Add vanilla and beat until smooth. Add milk if needed but not too much! You can adjust the consistency to whatever you want by adding more sugar or more milk.

Depending on the consistency, sometimes it’s easier to refrigerate the icing before piping, but if it is thicker, it might be easier to have it at room temperature. 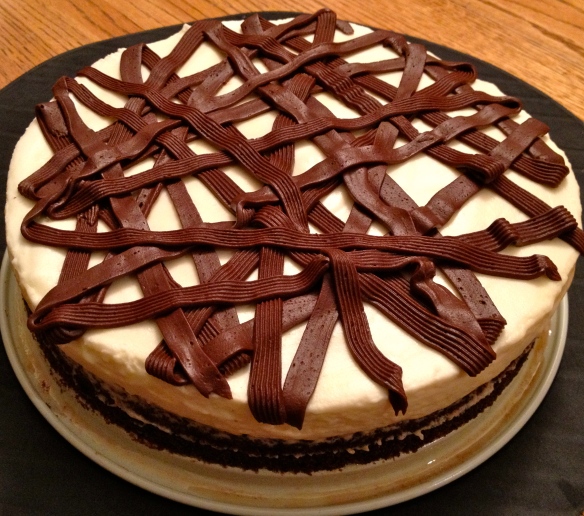 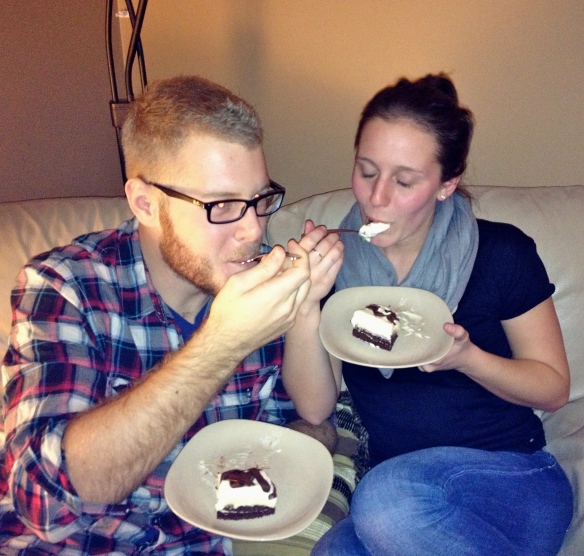 Laura and Reg enjoying their dessert.