Happy birthday to me! Today is my 24th birthday! I’m a little bit shell shocked, because I am now firmly planted in my MID twenties. GAH. Where did the time go?

We are heading out to Canmore to do some hiking with a couple of friends and then spending the night at my cousin’s place (she just moved to Canmore and travels a lot so has given us a key! Hooray!). My request is that I lie on the couch drinking eggnog while Shea, Sarah and Keith make supper. I figure I’ve hosted cooked enough for the three of them over the years that this is allowed!

But the one thing I reserve the right to make is my cake. Now I know what you’re thinking…what a control freak. But baking the cake is truly half the fun for me! I don’t want to miss out on an opportunity! And lucky me this time, I’ve managed to find an excuse to make two!

Reuben and the Dark – Check them out at www.reubenandthedark.com

Last night Shea and his band Reuben and the Dark played a show, so before hand I had a few people over to eat cupcakes. Enter ‘cake’ number one. The other day on a blog I read about this totally amazing cup cake that was based off of some chocolate bar that I’d never heard of. Unfortunately I didn’t bookmark it (story of my life) and couldn’t find it again. So instead I just took inspiration from that one to create one of my own! Cue Caramilk Bar Cupcakes!

I started with a dark chocolate cupcake recipe, melted down some caramels to pipe into the centre of the cupcakes, made buttercream icing (with caramel swirled in) and topped it off with a piece of the actual caramilk bar! They were quite time consuming, and the inserting of caramel didn’t go quite as smoothly as I’d planned, but overall they were delicious and totally worth the effort! (Then again, I rarely think that things aren’t worth the effort. Except when it’s chestnuts).

Pre-heat the oven to 350 degrees and line a muffin tin with baking cup liners (for muffins etc I don’t use liners because of the waist, but since the point of cupcakes is that their pretty, I used them for ease of getting them out of the container in one piece).

Combine chocolate, butter and cocoa in a medium heat proof bowl and place over barely simmering water (or use a double boiler if you have one). Heat the mixture until the chocolate and butter are completely melted and everything is well combined. Set aside to cool until just warm to the touch (you don’t want the hot chocolate cooking the eggs!)

Whisk flour, baking soda and powder in a measuring cup and set aside.

Divide batter evenly among 12 muffins pan cups. Bake about 18-20 minutes, until an 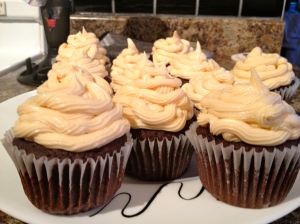 inserted skewer comes out clean and the tops spring back when touched.

Cool cupcakes in the pan on a wire rack until you can touch. Remove them from the pan and place on a wire rack. Let cool completely and store in an airtight container until ready to decorate. These can be made the night before.

Beat butter with the paddle attachment of an electric mixer for a few minutes until smooth. Sift icing sugar in a cup at a time beating until smooth each time. Likely before the 3rd cup you will have to add a bit of liquid. Don’t make it too thick (it will be hard to pipe) and don’t let it be too thin (then it will just run all over the place).

Meanwhile, place a heatproof bowl over a pot with simmering water (like a double boiler). Put the caramels in and let them melt. This will take a while. When they are mostly done, put a few tbsps of milk or cream in and stir it up. It should be relatively running but not too much!

Let the caramels cool a couple of minutes then put about 1/3 into the icing and mix with a spoon. To achieve swirls you have to be really gentle (which I have yet to achieve). Set icing aside.

Get out cupcakes and a sharp knife. Cut little cones into the centre of the cupcakes and cut the bottom off the cones. Place caramel in a piping bag. I used a plane thin round head. Pipe caramel into the middle of the cupcakes. Don’t fill them all the way up, but be generous. Replace the ‘cones’. Don’t worry if they don’t look good, they will be covered anyways.

In another piping bag, place the icing. I used a sort of eight sided star thing for this one. Pipe the icing onto the cupcakes. I just went in circles, but you could get creative. Once all the cupcakes have been iced, put them in the fridge to set for about 10-15 minutes.

Heat some more caramel and place it in the piping bag. Take out the set cupcakes and pipe a little bit of the caramel over the icing. Place back in the fridge to set once again.

Take out one more time and put a square of caramilk bar on top! I just dug the corner in. And voila! Take some pictures. Pat yourself on the back. Maybe pour yourself some wine and get ready to bask in your guests awe:) these are crowd pleasers!

Put them back in the fridge to make sure they are good and set and take them out 10-15 minutes before serving. Enjoy!

6 thoughts on “Eating my cake…and making it too!”